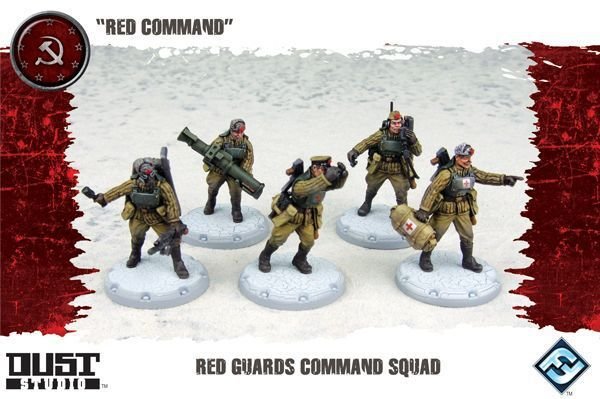 Long behind the Axis and Allies in VK technology and combat walkers, the SSU army of Dust Tactics has relied on the strength of its infantry to endure the war, and Soviet field officers have been no strangers to their nation's suffering. Accordingly, though the Red Guards Command Squad offers SSU players all the standard Command Squad skills, allowing them to reactivate your other units, call in artillery strikes, and help coordinate your attacks, these stalwart veterans arrive at the battlefield better armed than their Axis and Allied counterparts. This squad means business!

These battle-tested soldiers have upgraded their weaponry to better combat any direct threat they might encounter. The Red Guards Command Squad carries UGLs and a PTRS-47 for the times when it's best to lead by example. After all, these soldiers are more than just a group of tough officers and specialists: They are First Red Guards.
Save this product for later
Display prices in: USD
1-513-201-7672
mrb.rockinbgames@gmail.com
www.shop.rockinbgames.com