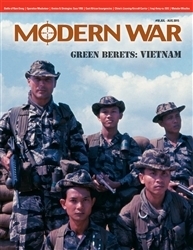 Green Beret: Vietnam (Solitaire) gives you command of a Green Beret team in the Central Highlands before and during the Vietnam War. Your duty is to lead your men on a variety of randomly generated missions (representing orders direct from high command), choose weapons and equipment that are best suited for the mission, decide on how to posture your team, plan your approach, and a method of extraction.

However, it is not quite that simple; you must choose weapons and equipment that do not expose your team, and do not cause unintended escalation (if the US military must divert regular combat units to your area to quell enemy activity, the value of the Green Berets will be called into question by the “traditionalists” at the Pentagon); Your goal is to disrupt the enemy’s freedom of action in your area of operations with a minimal “footprint”, and minimal cost.